The illustrations for the book are even better than I imagined. My story has completely come to life. I can’t wait to show them off. I’m very excited about finally adding the text to the images.

I hope Nanowrimo is going well for everyone. I’ve been extremely busy with school and…life in general so I haven’t had much time to post this month. Not as much as I’d have liked anyway.

I have a meeting today so I have to keep this short.

I hope you’ll check out the book when it’s published! 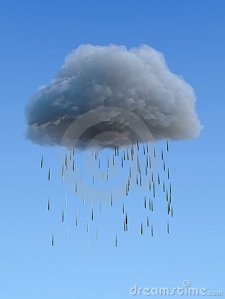 It was a gloomy day on Rosemary Avenue.

Little Donnie sat near the window with a scowl on his face, watching the big black clouds loom over his house. Donnie would have preferred to have been playing outside with his friends but Mother had said, “A storms comin’. You don’t wanna be caught in a storm, do you?”

To which Donnie replied with a, “No Mum.”

And so he sat and he scowled.

Moments passed and no rain came.

“The clouds just don’t want me outside!” He thought. “They’re making fun of me! It’s never going to rain!”

Well that was it for him. Donnie hopped up off the floor and stomped over to the shoe rack. He slid on his rain boots, slipped on his jacket and marched out the front door.

Donnie looked up at the sky and stuck out his tongue. “No clouds ever scared me!” he shouted. Suddenly he heard a loud roar. It sounded as if someone…or something were very, very upset with him.

Donnie’s eyes lit up as the flashes of light zipped across the sky. He hurried to the door, stumbling in his boots. He nearly lost balance when he heard the next Crack! He twisted the knob and flung open the door.

Mother tilted her head and gave him a half-grin.

Donnie ran to her and gave her a hug. “Oh Mum, I think the storm is angry with me!” the little boy sobbed.

“Actually, I think it’s saying, ‘Listen to your Mother and stay indoors’.” she chuckled, kissing the crown of his head.

Thanks for reading my short story. I was inspired to write this because I came across an old children’s book of my fathers, and started reading from it. The book was a collection of short stories about children. I found it to be a really nice book, something that the whole family could enjoy (if you have small children). The pictures are very nicely illustrated and the stories are only about a page long. There are poems, and songs created by the children in the tales as well…I hope that I can get (or write) a book that fun and engaging for my own children (and for other children as well).

Hoping that you’re all having much better weather than I am,

Even today books my Robert Munsch still have me laughing.

What is your favourite children’s book author?