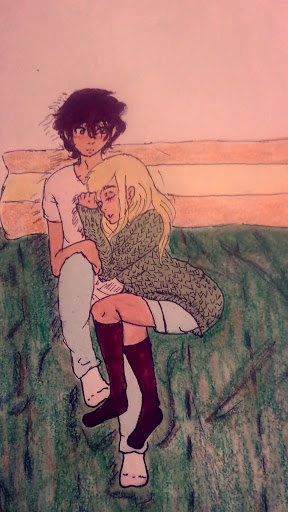 I realized that I didn’t own a hairdryer when my sister’s wet towel brushed against my skin last night. It was cold. It soothed the pain in my bear arms but I moved it away, onto her lap. Whenever someone wore a towel on their head I imagined the Virgin Mary.

She looked at me, big eyes glaring. “I just washed my hair.” Always glaring.

In that moment I felt stupid. Glaring eyes often made me feel as though I’d done something stupid.

I felt uneasy as she pressed her back into my pillow. The olive green towel reminded me of my sweater: how it hung on her and how her gold strands clung to it as she rested against me.

My sister elbowed me. Woke me from my trance. Told me Dad wanted to talk.

My eyes left the green and my hands found the phone. I wondered why I had been in such a daze. Wet hair was soft, I thought. I haven’t worn that sweater in a long time.

Whenever we spoke lately he felt as though he was keeping me away from something. I just had trouble finding things to talk about. I wanted to hear warmth in his voice.

Love blossomed in the Fall, but made me feel dead.

I was not fond of the weather. It was deceiving. Deceiving Canadian Fall.

The weather was as schizophrenic as our identity. Some said they felt it was bipolar…perhaps…perhaps.

I wondered how anyone could rest their head in such a messy room. It smelt of burnt popcorn, wet towels and cologne.

She was the Summer. I the Fall.

For once I had fallen, she had fled. As the warmth does when death comes.

She was Life. I Death.

Despite wishing, I represented the end.

“I love this sweater.” she said.

She wrapped her fingers in mine. It felt uncomfortable.

I remembered the wet green towel. My sister was asking for the phone back. I placed it in her hand. I watched the television. You could get lost in the television. No thoughts. Always glaring. Always stupid. Always wishing.